The stance should begin from the ground up in order to build a solid foundation. At GOALIETECH™ we believe the  two most important areas of the stance are the feet and stick. If these two fundamentals are in a proper position, the foundation will be strong and the other elements of the stance will be stable. The posture is also a key ingredient because the weight needs to be over the correct area for balance as well.

Here they are the in order... 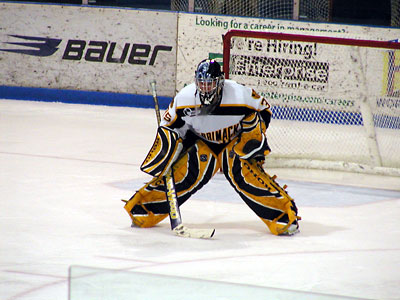 The stance consists of several different elements dependent on the game situation. Starting from the ground up, the feet are placed so that the legs are at an approximate angle of 45 degrees in the coronal plane as seen above so you are loaded for a strong push laterally if required. Depending on skill and comfort level the angle will increase. A beginner will not have such a large angle and would be more vertical until comfortable. The feet are the foundation. A goalie also needs to be a strong, powerful skater, especially in all of the reverse and lateral directions.

The most important tool a goalie possesses is the stick. If the stick is in a proper location (tracking the puck) it allows for good balance. The stick is the 'lead' in most situations during the game. Wherever the puck goes, the blade of the stick should follow in a square position to the puck. The arm posture should be slightly ahead of the pad so your stick is approximately 8 to 14 inches in front of your feet depending on your height. 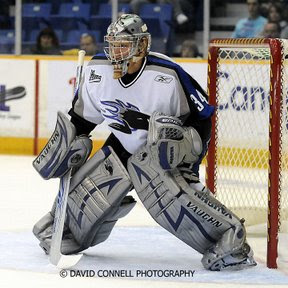 In order to move quickly in all directions, it is crucial to ensure your knees are at a proper 'bend' angle thus loaded for a hard push. The knee stance should be bent so that your leg is around a 145 degree obtuse angle. Your posture or weight should be slightly forward so that you are comfortably onto the balls of your feet just before putting strain on your muscles below the knee. Tense muscles restrict movement. An athletic stance allows the goaltender to move quickly at any given time. A hip bend into the saggital plane (forward) is crucial to free our legs of weight in order to make strong pushes in any direction. ***Be sure not to bend at the waist***. The waist bend will put you back on your heels. The hips should be bent to create a spine angle anywhere from 45 to 60 degrees depending on skill and comfort level. More skill, more bend.

Balance is key for any goaltender to be successful. The hands or gloves play a huge role in maintaining balance and posture in the athletic position. The Blocker is restricted to knee level due to the stick blade being on the ice. The catcher should be somewhere in the same axial plane (height) vicinity as the blocker, as seen above for balance. Some goalies like to move the catcher higher when a shot is about to be released which is fine. Make certain your catcher is 'palm facing forward' to be square and 'big' to the puck or in a blocking save position.

The arms need to be slightly off the body as seen above. If you are tucking your elbows and arms into the core, it effects your balance, posture and speed. The arm posture should also be slightly forward in the stance for balance as well.

Since the spine is in a forward lean and bend, so we are on the balls of the feet, the head should be slightly bent down as well for balance. If the chin is held up it will offset the spine angle and balance and make you unstable and off balance.

Samples and critiques below...

On the near goalie notice the gloves are slightly ahead of the pads to allow lateral transfer movement across the body. The stick is in a good position about 12 inches out in front of the stance and the blade is at a perfect angle (not ramping too much)

Remember we all have to start somewhere. A better knee bend required which also puts the stick blade in a better location and flat. The gloves are at different heights which puts the balance off a little. The catcher is in 'double coverage' meaning it is protecting net that is already protected by the arm. The catcher needs to move out away from the arm. The goalies left leg is more vertical than the right which puts him of balance.

This goalie is 'sitting' in his stance putting him off balance. He is bending at the waist rather than the hips. He is also lacking a knee bend to a forward position. Gloves are to far extended out in front which also disrupts the balance. 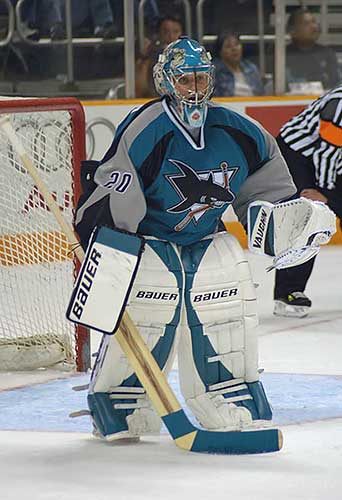 This goalie is just lined up for a face off. But if this were his stance just prior to a shot release you can see he would be limited to a quick release of his legs since the body weight is over top of them which restricts speed.

This goalie has nice glove and stick positioning. A better knee, waist, and head bend is required . He is to 'tall' or erect.

Here again is the 'sitting' stance. This photo is a perfect example of the non advised waist bend. The hips should be tilted forward rather than the waist bending forward. If you were to give this goalie a slight nudge on his forehead he would fall over due to lack of balance and posture. He is also on his heels because of the lack of knee bend forward. The arms fully extended also contributes to poor balance. Notice the good right arm position and how it is off the core slightly. The catcher is in an interesting position. He is trying to indicate to the shooter there is no top corner available. The left leg is at a greater angle than the right. That makes it slightly harder to push laterally to his right but he might be preparing to slam that leg down to seal of the low short side. This stance above is a tracking or 'viewing' stance from a screen situation. Notice he is trying to look short side. You should always peek to the short side first and low first. The shot is more likely to come short side and the short side deflection is more dangerous than the far side. Remember, when you lean that changes certain fundamentals in your stance. Notice the blade of the stick and how it is now out of position! He should be conscious of this.